How I beat Trey’s Tokyo challenge

Today the great HDR photographer/traveller Trey Ratcliff (aka stuckincustoms) tweeted a new photo from Tokyo, one of my favourite places. I clicked immediately to check it out and it was awesome as always. But this time he wrote a challenge to his fans to identify the place where the photo was taken. I was hooked, because I love these things: Geography, Tokyo, Challenge.

The place photographed is a very luxurious bar. I focused on the amazing blue-hour view out of the window. The one instantly recognisable object was Mori Tower in Roppongi Hills – the bigger one, not to be confused with another Mori skyscraper near Tokyo Tower. This narrowed down the location to Roppongi Hills. Good, but it’s huge, what’s next?

I started to carefully look around the tower and noticed two twin towers next to the Mori Tower, about half its height. With this crucial information, I headed to the inevitable Google Earth. There, Mori Tower and its two neighbours suggested that the target is somewhere in the North-East. Because these three buildings are on the left side of the boulevard, according to the point-of-view of the photo. It must be somewhere around Roppongi Station, I thought, and at the time I believed the target was the Ritz-Carlton hotel in that area. Still, I couldn’t find the bar in the official site of the hotel.

I pulled back the view until I was on a place that could be the target, about double the distance from my original idea, Roppongi Station. The new target candidate was identifiable by another skyscraper on the left, almost obscuring the view towards Mori Tower. This had to be it: a huge hotel with triangular shape. Google gracefully directed me to its official site, where I saw a list of bars and restaurants. The ones on single-digit floors didn’t interest me and my attention fell on a bar on 36F. Going back to Trey’s photo, I took notice of two types of chairs in the mysterious bar: very rounded at the tables and small ones with a little curved back, at the bar.

The slideshow on the official site eventually revealed to me the exact same furniture and I was now 100% sure about the location: Manhattan Lounge on the 36th floor of ANA Intercontinental Hotel Tokyo.

To see this challenge and many more amazing photographs from all over the world, check out http://www.stuckincustoms.com. 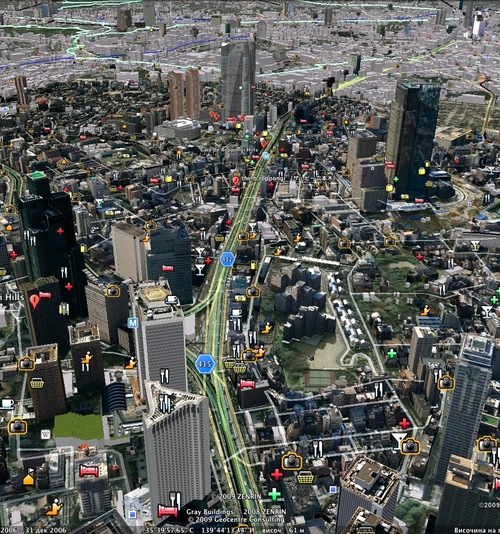