Sentimentality and rationality in Blade Runner 2049

A magnificent sequel focusing on polar beliefs that make people fight and abuse each other while driven by questionable information and slippery emotions.

Shockingly, the replicant designer/villain has a point: Humanity seems to have run its course and is about to be succeeded by obedient workers, created out of necessity and godlike ingenuity. After regular humans have failed their society, replicants are the inevitable next stage of evolution. The old world is lost forever, which is the main theme of dystopia and a reason enough to return to the dreary world of future noir. 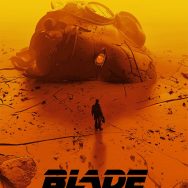 Old school homo sapiens oppose the evolution, clinging to a humanity that sadly doesn’t exist anymore. What makes one believe their kind of people is the right one and the proverbial others should disappear? Both sides are correct and have found a truth for themselves. Now what?

By journeying across loyalties, the new blade runner is literally on the edge. Originally ambivalent, he chooses a credo based on his emotional response, as the film sets up a cruel joke on the Hero’s Journey. The protagonist stumbles in the gap between fact (civilization is slavery) and hope (romantic fight for freedom). A personal dilemma extrapolated worldwide. Hidden duality tears personalities and whole societies apart. Like the sea wall between a wild unstoppable ocean and the faint remains of our urban habitat. 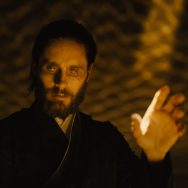 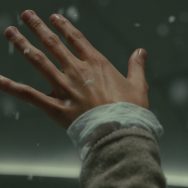 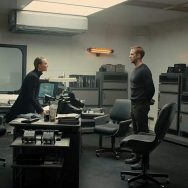 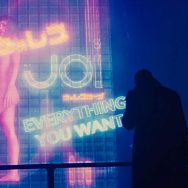 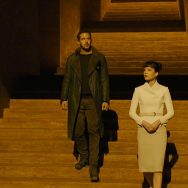 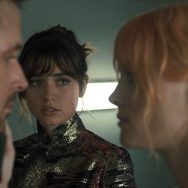 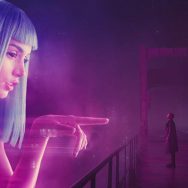 The key to the film’s striking philosophy is in one of those episodes that come from nowhere to blow our minds. The extraordinary sex scene visually presents the discrepancy between object of affection and physical object. A programmed romantic ideal moves in and out of sync with tangible flesh. Our nostalgic affection for the original film is starkly contrasted with the even bleaker 2049. A fading sweet memory is more enticing than cold reality. The old music is romantic, while the new soundtrack is droning and punishing.

As a film about the tragedy of extremism, 2049 is awash in contrast between shadow and light, fractured sound, checkerboard patterns and extreme differences in colour palette. Villeneuve’s camera tends to linger over a scene, with clinical precision, Tarkovsky style, leaving time for the audience to live through the situation and make their own mind. There are no circling panoramas, only movement in one direction, the inevitable dark future of humanity that has forgotten what made it human.

I am… I was. You are born, you witness a miracle, which becomes the irrational highlight of your life, you die. Only the memory remains, but how to interpret it?